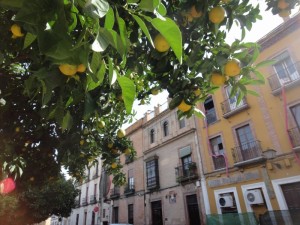 Orange lined sidewalks, lush leafy trees perfuming every street.
He planted them when she asked for snow, the legend goes.
Now the ground falls pure in Seville springtime
White blossoms blanketing pedestrian feet.
They have so many orange trees in Seville, every tourist will say.
Natives will tell you not to take a bitter bite, but
follow the color and you will find
the garden, Adam’s Eden in a city. It can be spotted, lush and large, from
the highest tower built for the walk of a donkey. A palace oasis of romance from a time
of golden towers. It’s a far-away wild jungle within arm’s reach. Find yourself
in a mosaic corner and listen to the water spit. Leave those celestial walls and enter a
playground for Indiana Jones, each tan rooftop asking for a legend. He could easily scale
that city. Find a random street and try a cookie without a name, from
a nice baker who doesn’t speak English. Turn the corner and
it looks the same. Where are we?
It doesn’t matter. Let’s just try to find the river. Don’t cross it, he says, they are of a
different kind over there. But the bridge is so tempting, modern on the sky, maybe if you
just take a peek at those houses that aren’t a part of the city you will understand the
forbidden.
The forbidden. Forbidden to believe as the city deity changed hands. It was Islam until it
wasn’t. Jewish until it died. Jesus blessed the aftermath. A maiden’s skull sits
in the window still today.
Plant an orange tree in her honor,
sit on the stones to remember their makers,
look in the cracks to know what heavy blow broke them.
Climb the tower to see the garden.

7 thoughts on “Walking in Seville”